Today is May 6th, the beginning of Nurses Week in North America which ends on May 12th, the birthday of Florence Nightingale, and, since 1974, is celebrated as International Nurses Day.

Though I will not be buying any Hallmark cards for my nursing chums, I am thinking of my comrades and sisters who are my fellow nurses. Those friends we made, bonded in student years with the sharing of patients as we changed ward rotations; the remembrance of patients who were dear, beloved, or cantankerous, those we recall as much by attitude and character as by disease, those births celebrated and deaths honored. Then there were the working years before reentry to university bringing new adult companions, both student and teacher. Now, in this final quarter of life, I have found a sisterhood of nurse writers and poets. Some still work at the bedside of, or in the clinics with, patients – others teach, and all of us remain nurses within our communities and families. We write of the past, distant and immediate, bringing disease and care into the present. 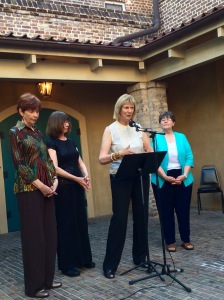 We are lucky to have found each other and are grateful for the collectors among us: Cortney, Judy and now Jeanne who gather up our words, harvest them to reseed the bare virgin soil of tender young hearts. We write from different geographies of the Americans and the world. Jeannie Bryner from Ohio, Cortney Davis from Connecticut, Venenta Masson from Washington DC, Judy Schaefer from Pensilvania, Madeleine Mysko from Maryland, Patsy Harman from West Virginia.

Before I left California, I took from my bookcase the written work of my nursing friends. It is an impressive display of non-academic writing from professional women and men, and grows each year. 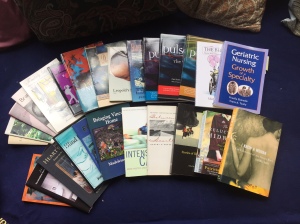 In 2018 Kent State University will publish another anthology of nurse writing, ‘This Blessed Field.’ Within this anthology are stories from young nurses, our stories, sharing our innocence with the new nurses of today helping to guide and comfort those following in our footsteps with the light we shine for them.

Each year on May 12th a church service is held in Westminster Abbey in London and at St. Margaret’s Church at East Willow in Hampshire. Wikipedia tells me that during the service, a symbolic lamp is taken from the Nurses’ Chapel in the Abbey and handed from one nurse to another, thence to the Dean, who places it on the High Altar to signifies the passing of knowledge from one nurse to another.
I will be in London that day and will go to the Abbey.

It was 1995 when Between the Heartbeats Poetry and Prose for Nurses was first published by the University of Iowa State Press. Conceived and edited by Cortney Davis and Judy Schaefer, this was the first Anthology of Creative Writing by Nurses, gathered from around the world. 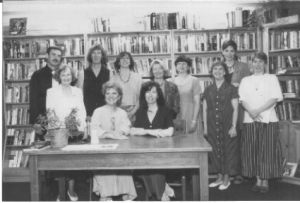 Between the Heartbeats writers at Chapters Book Store, Washington DC, 1995

For many nurses it was the first time our medical writing had been accepted for publication. That summer as many of us who could, maybe twenty out of fifty contributors, came to Chapters Book Store in Washington DC for our first ever reading. This coincided – not unintentionally – with the annual general convention of the American Nurses Association. The evening was exciting, scary and thrilling. Scary because we were reading our own work and thrilling because we were hearing the words and work of other nurses. All of us facing the same direction, our voices so different and yet so deeply in tune with each another. There was an audience, listening, applauding and asking questions. One man spoke up, “Wow, this is amazing. Can’t wait for when you present this to the ANA”. We were all silent before Cortney, in her calmest most diplomatic way, (her speciality) replied, “Actually we won’t be at the convention. They don’t want us and won’t let us present the book there.” Among the audience were nurses who would be at the convention. We were all stunned, silenced and sobered that those nurses for whom we wrote did not deem our words necessary or supportive of their work.

As nurse writers we came together for that weekend forming a tight union of sorts, loosely knit, tendrils of thought, vision, each of us seeing and transforming through words, our patients in the wards, clinics and communities we serve. Since those early years we have continued to write, sending each other our books, reviewing and commenting for each other, hosting nurses writers on the radio and spoke of our work to audiences wherever we could.

Coming together was always a chancy affair but we get our moments. Two years ago The Medical University of North Carolina held its first “Narrative Bridge Conference”. Five of us, Jeanne Bryner, Cortney Davis, Veneta Masson, Judy Schaefer and myself, made it there for the long weekend;. We were billed as “The Nurse Poets” and that is what we have become. Through the years more books of poetry, prose, creative non-fiction and novels have been written and published and within the ‘about the author’ description the word “Nurse” always leads. This is who we are, this is where we speak from, whenever and wherever we can.

It was Lisa Kerr from the MUSC school of nursing who again called us together this year. Lisa wrote asking if we could come, not only to speak to the faculty and students of the nursing school but that there could be an opportunity to perform as The Nurse Poets in the annual Piccolo Spoleto Arts Festival at the Dock Street Theatre. New books had been published, among them, Jeanne Bryner’s poetry Smoke, Cortney Davis’ When the Nurse Becomes a Patient, which won an American Journal of Nursing Book Award for 2015 and my 2016 The Bell Lap Stories for Compassionate Nursing Care were all hot off the press and we were eager to share our work. I was ending a roll-out with The Bell Lap, coming down from New York and a launch at the National Arts Club with the great cartoonist, and tonight – host – Roz Chast whose book about the final years of her parent’s lives Can’t we Talk about Something More Pleasant, remains a best seller. 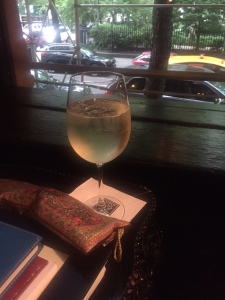 A little help with the night before prep.

It was – is – fun to be on the other side of the microphone. This was a first for Roz who is more used to being questioned about her work, and almost a first for me, being more used to asking those questions. With her questions and comments, memories surprised me and in the quickness of the moment words did not always take the long route – through my brain – as they rushed from my heart to my mouth. Maybe it was not the smartest thing to recall ‘my first leg,’ after Roz’s question about my failed operating room experiences. And so we learn. Beloved friends were there and I was more than grateful to see nurses in the audience, plus a doctor or two. Paul Gross and Dianne Guernsey who co-edit Pulse Magazine “Voices from the Heart of Medicine” came in on the train, Cousin Tom rode the bus from Cap Cod and nurse colleague Gerry Colburn traveled in from New Hampshire.

A Hug from Tony and Peter After it is all over.

It was a great evening and gave me the needed boost and courage to fly down to Charleston and join the band – not yet a rock band – The Nurse Poets.

Four of us had made it and it was grand to be together. Jeanne had driven for two days from Ohio. Cortney flew from Connecticut, Veneta from Washington DC and I from London, via New York. At breakfast we celebrated with coffee and grits. We quickly shared our stories, families, the agonies of book promotions and knowing as all women of a certain age do, that we will continue to balance these lives until illness, infirmity or death claim us.

At noon, under Lisa’s guidance, we spoke at MUSC nursing school for more faculty than students but how eager they all were, how they knew the importance of story, the lives led before and beyond the illness of the patient. Then an afternoon break before being driven past the Emanuel Church where flowers are still laid out daily in remembrance of last years tragedy to an early supper of fine southern food. (Where oh where do I get the real recipe for Green Fried Tomatoes?)

Then we walked to the Dock Street Theater where the audience was already gathering for our evening performance. The theatre is nestled in a small courtyard, intimate and perfect for poetry readings. The seats filled quickly and chairs were added along-side the cloisters until there was standing room only. We sat, warm but not hot, under the evening sky. Our time was tight, and so were we. Introductions by Barbara, the organizer of the festival. then Lisa, organizer of us and then, following each other in alphabetical order, we were on. Each of us brought our full-to-overflowing hearts to the mics and poured out our words. Jeanne watching family, Cortney and Veneta their clinics, and I from the wards and communities before returning to nursing school with an excerpt from The Bell Lap.

The audience rose to applaud these words that came from our hearts and our memories. Why did they love us so? We were good 🙂 yes but was it just the words, or was it the knowledge that with these words they know we have seen them, as people before patients. We have marked and held them in our hearts and returned them to themselves, thus received and healed, if not cured. Giving this audience an understanding that as these words have come from the wards to them they may also return to the new young nurses of today.

Jeanne, Miriam (The next generation), Veneta and Muriel enjoy the reception for The Nurse Poets.

Not everyone will be stopping by Charleston, SC, but for those for whom the Piccolo Spoleto Festival is a stop on their calendar, this would be good. The ‘Nurse Poets’ will be performing on Tuesday, May 31st at 6.30 p.m. at the Dock Street Theatre Courtyard, 135 Church Street, Charleston, South Carolina. Hope you stop on by and enjoy ‘From Wards to Words’.